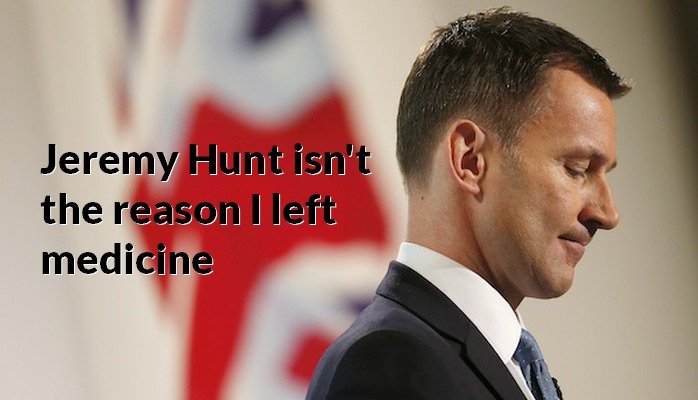 Nowhere on that list will you find the name Jeremy Hunt. Yes, he plays a major part in the Junior Doctor Contract dispute and a significant number of doctors want to leave the NHS because of him, but he is not the primary cause for doctors wanting to leave the profession altogether. He has made us feel negative about the profession, and his actions have been the “last straw for some doctors”. But being the “last straw” means that there are other reasons at play, as I mentioned before.

“I was rather oblivious to the fact there was a contract dispute.”

I actually left medicine on August 5th 2014, the same year that talks broke down between the BMA and Government over changing the contract. It was only a year later that I really learned about what was going on. I was out of the profession and so didn’t hear as much about the politics of the job. I was rather oblivious to the fact there was a contract dispute. It wasn’t because I didn’t care. It was simply because I was focusing on what mattered most to me. As much as medicine was in harmony with my core value of helping people (although this core value wasn’t always satisfied), it was totally against my core values of expression through creativity, quality time with family (I worked in Yorkshire and my family were in London where I was born and raised) and learning about modern technology.

With regard to helping people, this core value was only partially met as I was never really empowered or supported in working on improving efficiency in the workplace. Instead, I had to subscribe to the traditional ways of working, no matter how slow or unnecessarily complicated they were. This used to frustrate me. I didn’t always have the solution to the problems faced, but I did know that tolerating problems was wrong, because as a doctor you strive to make the lives of people better, rather than tell them to just put up with the status quo. Even when we are faced with diseases we can’t cure, we still provide counselling, self help guides and support groups in the very least, as well as medication for symptom relief. Yet when everyone knows that writing the clinical notes on paper as well as a computer system is double the work load (or longer when the computer system fails), you are told to just get on with it.

“The longer I worked as a doctor, the less I lived as myself.”

I, like most other doctors, have a variety of skills and interests completely unrelated to medicine. For some, these competencies can be at such a high level that they could even be used at a professional level. But  the vast majority of doctors only have time to work clinically. These passions sit on the backburner and become distant memories. This is rather tragic, as it was these skills and interests that defined these people, and now they have no time for them. I used to perform at gigs, draw portraits and play computer games. Then I worked as a doctor, and I changed. The longer I worked as a doctor, the less I lived as myself.

“Life as a doctor made me a better man but didn’t make my heart sing.”

There are negative aspects to every job as no job is perfect. However, when you love your job, the bad bits don’t seem that bad since there is plenty good to outweigh them. There is no better job than one that makes your heart sing. Life as a doctor made me a better man but didn’t make my heart sing. I felt down a lot of the time. During my third year of practice, I had the great fortune of being a contestant on a Come Dine With Me Christmas Special whilst working in York. I had so much fun, especially when I got to have a jam session with friends. Yet by the end of my night, I wept. Literally, I was brought to tears because I had a jam session. I hadn’t had so much fun in years because I never felt I had the time to, and that fact hurt me. I felt my life was being robbed from me, but I chose to be a doctor, so was I not robbing myself? How could that be though?I was doing what I loved, wasn’t I? The truth was, I wasn’t doing what I loved – I was doing what I thought I loved and what I felt I had to do.

So I took back my life. I put myself in a position where I didn’t feel trapped by my profession and could instead feel liberated by it. I have the job satisfaction that I deserve, and I recognise the positive impact I have on the world because of my new role as a Clinical UX Designer. I have no regrets about leaving, and I value every experience I endured, the good and the bad, as they have made me the man I am today. Ultimately, I’m now where I’m supposed to be.

If you are thinking about leaving medicine, or changing careers in general, or just want to have a chat, please do get in touch. Please do comment and share your opinions, I’d love to hear your thoughts on that matter.

This website uses cookies to improve your experience while you navigate through the website. Out of these, the cookies that are categorized as necessary are stored on your browser as they are essential for the working of basic functionalities of the website. We also use third-party cookies that help us analyze and understand how you use this website. These cookies will be stored in your browser only with your consent. You also have the option to opt-out of these cookies. But opting out of some of these cookies may affect your browsing experience.
Necessary Always Enabled
Necessary cookies are absolutely essential for the website to function properly. This category only includes cookies that ensures basic functionalities and security features of the website. These cookies do not store any personal information.
Non-necessary
Any cookies that may not be particularly necessary for the website to function and is used specifically to collect user personal data via analytics, ads, other embedded contents are termed as non-necessary cookies. It is mandatory to procure user consent prior to running these cookies on your website.
SAVE & ACCEPT
Share This